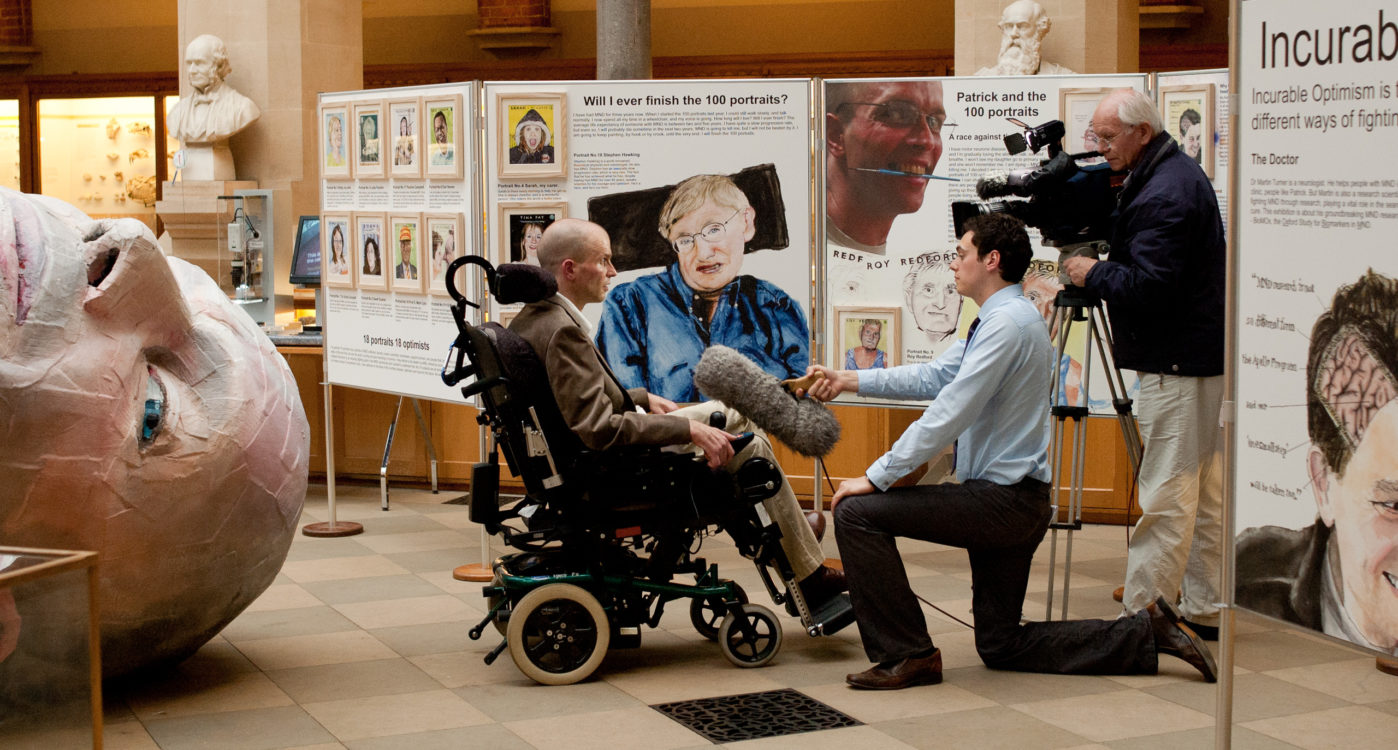 Prof Ammar Al-Chalabi next to his portrait

Pat is my friend, an artist, right-proper-mensch and an “incurable optimist”.

Incurable because he has Motor Neurone Disease (MND). Life expectancy is now a couple of years (perhaps more if he’s “lucky” as this disease slowly withers and destroys his once-formidable frame.

Optimist – because that’s an essential part of his character. He’s no blind optimist though – he’s optimistic and indefatigable. He’s always been an incredible force for life in all its aspects.

Here’s the show of the portraits he’s made as part of a series of 100, kind of for the MND Association. It’s faltered at #18 as his hands and fingers couldn’t keep up with the onslaught of MND. But 18 is a good number. And to make up for the shortfall he’s curated and designed the show himself. Never one to shirk a challenge. And it was fabulous. I took a few pictures at the show (above) – and have added a gallery of his images below. Enjoy…

Kath is supportive, loving and caring. Without her I would be lost. The writing in her hair is something she said to me when I was first diagnosed, “I will always look after you, right until the very end.”

Martin is a neurologist and a tireless and innovative MND researcher. He has become a friend and has inspired me to become an amateur neurologist. I feel lucky to have met him.

Sarah is an inspiration to me. As a single mum she has brought up two lovely children, despite being unable to walk, speak or use her arms. She helped me when I first got MND, when I felt very scared.

Sarah is there every morning to help me get up. She is always cheerful, always looking for extra things to do to help me. She is a wonderful person, and makes the world a better place.

Mark is my friend, and has bulbar MND. He struggles to breathe and has just had a tracheostomy, which is the ‘Cut Here’ bit in the picture. He is a lovely man, so full of life.

I am an amateur inventor but I bow down humbly before Earl’s talent. Despite having bulbar MND and being unable to speak, he has set up a business making his inventions for disabled people.

Emily’s dad died of MND, and she resolved to become an MND research scientist and help find a cure. She’s an inspiration. We need more people like Emily.

After retiring, Julia devoted her life to helping people with MND. She is an association visitor, on the frontline of caring for sufferers. She’s a campaigner and a fundraiser. She is a hero in my eyes.

Roy is an amazing man. He has run the last 19 London marathons for the MND Association. He is 81 years old.

Mark is a strong and charismatic man. Diagnosed with MND at the age of 71 he set up a hugely successful blog to help people through terminal illness with his own brand of optimistic humour.

My parents are the biggest optimists in my life after Kathy. Right from my diagnosis they have been positive, supporting me in all my crazy schemes, and even suggesting a few new ones.

Vinita has MND and lives in Sri Lanka, she is the first person to be painted from nominations on this website. Vinita dances in her wheelchair, so I painted her dancing. Beautiful.

Dr Brian Dickie is the director of research development at the MND Association. Brian is in charge of their research programme and spends the money we raise. In him is invested our hopes of a cure.

Before getting MND, Tina was a personal trainer and tennis coach. As soon as she was diagnosed Tina set-out to raise as much money for the MND Association as possible and has raised over £40,000 so far.

‘Sickeningly talented’ someone said to me about Ammar. A world class MND research scientist, making discoveries hand over fist about the genetic basis of MND – he’s a genius, and he’s our genius.

Pauline’s husband died of familial MND. Since then she has raised a huge amount of money every year, £100,000 in total, determined that a cure will be found before her children are old enough to die from it.

Stephen Hawking is a world renowned theoretical physicist and cosmologist. He also has MND. The fact that he has achieved what he has, speaks volumes for his courage and optimism. He’s a hero, and he’s our hero.

Finished! I am no silk purse, but i’m no longer a sow’s ear either, so thats good. I haven’t put a number on this one because i’m going to save it to be number 100.